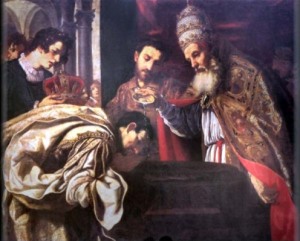 St. Sylvester, whom God appointed to govern his holy church in the first years of her temporal prosperity and triumph over her persecuting enemies, was a native of Rome, and son to Rufinus and Justa. According to the general rule with those who are saints from their cradle, he received early and in his infancy the strongest sentiments of Christian piety from the example, instructions, and care of a virtuous mother, who for his education in the sound maxims and practice of religion, and in sacred literature, put him young into the hands of Charitius or Carinus, a priest of an unexceptionable character and great abilities.

Being formed under an excellent master, he entered among the clergy of Rome, and was ordained priest by pope Marcellinus, before the peace of the church was disturbed by Dioclesian, and his associate in the empire. His behavior in those turbulent and dangerous times recommended him to the public esteem, and he saw the triumph of the cross by the victory which Constantine gained over Maxentius within sight of the city of Rome on the 28th of October, 312.

Pope Melchiades dying in January, 314, St. Sylvester was exalted to the pontificate, and the same year commissioned four legates, two priests, and two deacons, to represent him at the great council of the Western church, held at Arles in August, in which the schism of the Donatists, which had then subsisted seven years, and the heresy of the Quartodecimans were condemned, and many important points of discipline regulated in twenty-two canons. These decisions were sent by the council before it broke up with an honorable letter to pope Sylvester, and were confirmed by him and published to the whole church.

The general council of Nice was assembled against Arianism in 325. Socrates, Zozomen, and Theodoret, say that pope Sylvester was not able to come to it in person on account of his great age, but that he sent his legates. Gelasius of Cyzicus mentions, that in it Osius held the place of the bishop of Rome 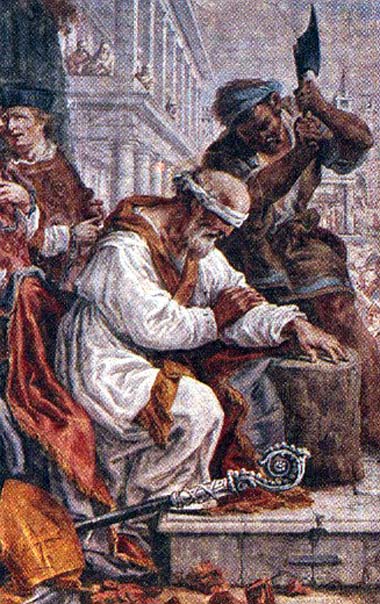 How powerfully do the martyrs cry out to us by their example, exhorting us to despise a false and wicked world! What have all the philosophers and princesfound by all their researches and efforts in quest of happiness in it! They only fell from one precipice into another. Departing from its true center they sought it in every other object, but in their pursuits only wandered further and further from it. A soul can find no rest in creatures. How long then shall we suffer ourselves to be seduced in their favor, be always deceived, yet always ready to deceive ourselves again! How long shall we give false names to objects round about us, and imagine a virtue in them which they have not! Is not the experience of near six thousand years enough to undeceive us! Let the light of heaven, the truths of the gospel, shine upon us, and the illusions of the world and our senses will disappear. But were the goods and evils of the world real, they can have no weight if they are compared with eternity. They are contemptible, because transient and momentary. In this light the martyrs viewed them. Who is not strongly affected with reading the epitaph which the learned Antony Castalio composed for himself, and which is engraved upon his tomb in the cathedral of Florence.

That peace and rest, now in the silent grave,

At length I taste, which life, oh! never gave.

Adieu! my joys at last are ever crown”d;

And what I hoped so long, my soul hath found.

(Source: Butler”s Lives of the Saints) 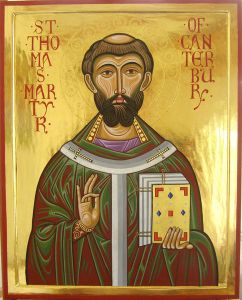 Like many clerical politicians of the time, he lived a lavish lifestyle supported by income from a number of revenue-generating clerical benefices or posts. Nevertheless, Thomas was a man of regular prayer and penitential practices. In 1162, the king named him archbishop of Canterbury.  Soon after,  he received the pallium, a symbol of his authority, from Pope Alexander III.

St. Thomas’ rise to the highest ecclesiastical post in England became an occasion of conversion. He abandoned his love of luxury to lead a rigorous life of personal piety. He gave alms daily and tempered his judgments with mercy. He also proved more zealous than the king might have thought about protecting the privileges of the Church against secular intrusions. That zeal led to increasing tension between king and prelate.

In his final decade of life, Thomas fought the king on a number of issues: the right of the secular power to appoint to clerical benefices; the place and power of ecclesiastical courts; and, most notably, the crowning of the heir to the throne by the archbishop of York, who had usurped the primacy of Canterbury.

Thomas, with the pope”s backing, excommunicated the archbishop of York and the bishops of London and Salisbury for their collusion. When Henry heard this news, he raged that someone needed to rid him of Thomas. Four knights obliged by hacking Thomas to death inside his church on December 29, 1170.

The king, who may well not have desired anything so drastic, did public penance for his sins in the same cathedral in July 1174, right after the canonization of Thomas as a martyr. In 1220, the saint”s body was transferred to a place under the high altar from its previous crypt to accommodate better the vast number of pilgrims coming to Canterbury.

The pilgrimage from London to Canterbury to venerate St. Thomas is immortalized in Chaucer”s Canterbury Tales. As the Prologue says, “To Canterbury they come, the holy blessed martyr there to seek, who gave his help to them that were sick.”

In the 16th century, aware of the powerful symbolism of a bishop who stood up against the monarchy to ensure the Church”s independence, Henry VIII, after breaking with the papacy, had the shrine of St. Thomas razed and the pilgrimages stopped. Today”s pilgrims can see the two places where Thomas”s body was buried and view the stained-glass windows depicting his martyrdom. His feast is observed in both the Roman Catholic and Anglican calendars.

He who is devout to the Virgin Mother will certainly never be lost.