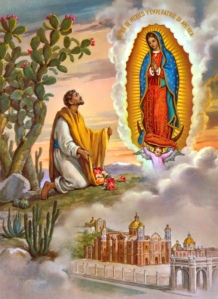 The oldest and most venerable shrine of the Blessed Virgin in North America is in the Basilica of Our Lady of Guadalupe in Mexico City. This was the scene of several appearances of the Virgin to an Indian peasant, Cuatitletoatzien, whose baptismal name was Juan Diego. The appearances occurred on the hill of Tepayac, which was then a few miles from Mexico City but which has since been absorbed into the city.

Early on December 9, 1531, Juan Diego, a recent convert, was halted by sweet music and a blinding light while on his way to Mass. He then saw the glorious vision of a Lady surrounded by a shining halo of light. The Lady spoke, bidding him tell the bishop to build a church there in her honor, and promising consolation to all who truly suffered and who would come to the church to pray.

Miraculous Picture. The bishop, Juan de Zumarraga (1468-1548), a Franciscan friar, was reluctant to believe the peasant”s story. He told Juan Diego to ask the Lady for a sign and then to come back again. The next day, December 12, the Lady promised Juan a sign if he would return to the spot a third time. Juan did not return as requested because he had to go attend to his uncle who was very sick. He instead took another path to avoid the Lady. When she appeared again to him on this new path, she spoke softly to him and asked why he did not return as requested. Juan Diego was embarrassed and told the lady of his mission to attend to his sick uncle. She told him not to worry, his uncle would recover. Juan would find out later that his uncle had indeed recovered, and at the very moment the Lady had spoken those words. She then told him to climb up the hill and gather the flowers that were blooming there. This was in the mountains and in winter, but he obeyed. He climbed up the hill and there he found beautiful and fragrant roses, at that time out of season. He gathered them, carrying them in his tilma, a long, rough, native cloak. He then made his way back to the bishop.

When Juan opened his cloak in the bishop”s presence, the roses tumbled out, and there was revealed, embedded into the rough texture of the cloak, a beautiful picture of the Lady as he had described her. This convinced the bishop that Juan Diego had been telling the truth.

The picture, product of no known human skill, has never faded. It was taken first to the bishop”s chapel and then enshrined in his cathedral. The chapel that the Blessed Virgin had asked for was soon built on the exact spot pointed out by Juan, who was appointed the first custodian. The foundations of this chapel have recently been found alongside the great basilica which was built in 1709. The picture hangs behind the altar of the basilica in a remarkable silver frame.

Papal Honors. Various popes have shown interest in the shrine and have granted numerous favors and indulgences. Pope Benedict XIV (1740-1758) granted a special Mass and Office in honor of the apparitions. He also extended the Feast of Our Lady of Guadalupe (December 12) to all Spanish territories in the New World. He had a copy of the image enshrined in the Church of S. Nicola in Carcere (St. Nicholas in Prison) in Rome.

In 1895 Pope Leo XIII (1878-1903), through a personal representative, placed a precious gold crown on the miraculous picture, thus bestowing the honor of papal coronation. In 1910, Pope St. Pius X (1903-1914) declared Our Lady of Guadalupe patroness of Latin America and granted indulgences to all who prayed before a copy of the miraculous picture. Pope Pius XI (1922-1939) extended her patronage to all the Americas, from Alaska to the southernmost point of South America, Tierra del Fuego. Finally, Pope Pius XII (1939-1958) had a faithful copy of the picture hung in the Vatican, an unusual honor.

(Adapted from Butler”s Lives of the Saints)