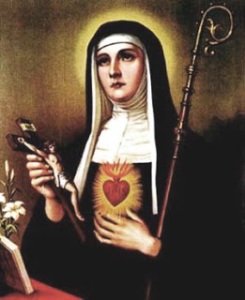 St. Gertrude was born in Eisleben in Upper Saxony, 1256. At the age of five she was an oblate in the Benedictine Convent at Rodalsdorf, over which convent she ruled for forty years as Abbess. The Roman Breviary states that she died in 1334 “consumed rather by the ardor of her love than by disease.” At the age of twenty-five she was favored with celestial visions, and towards the end of her life she received the stigmata. At God”s command she recorded her revelations in her wonderful book called Communications and Sentiments of Love.

The mission of this celebrated Benedictine nun in the Thirteenth Century was very similar to that of Margaret Mary Alacoque, which indeed she recognized and foretold in a prophetic showing. Her mystical life was lived in the Most Sacred Heart of Jesus; she is pictured with a flaming heart in her hand. When she spoke of Christ and the mysteries of His adorable life, her words were sweeter than honey and the honeycomb; her spirit was ever serene and radiant. Jesus revealed to her His Heart as a mystery of grace and love, rather than as an abyss of sorrow. She was not called to the special vocation of victim for the sins of the world, as was St. Margaret Alacoque.

A member of an order which for more than seven centuries had been the heir of patristic tradition and in which the Liturgy was almost exclusively the source of spiritual life, Gertrude conceived devotion to the Sacred Heart not as a separate devotion, but as a deeper intelligence of the great all-embracing mystery of Christ living again in the Church by means of the Catholic Liturgy.

On one occasion while listening to the beating of the Heart of Jesus, she asked St. John the Evangelist why he had not made known in his Gospel the treasures of light and mercy revealed to him during his mystic repose on the Savior”s Heart at the Last Supper. John replied that this new and touching revelation would be made later when the world had reached the depths of malice, and that in order to rescue it God would employ the last resources of His invincible love.

It is almost certain that excess in eating is the cause of almost all the diseases of the body, but its effects on the soul are even more disastrous.