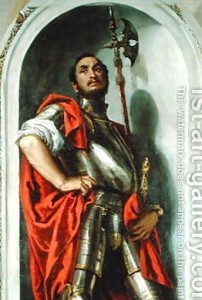 St. Mennas, and Egyptian, a soldier in the Roman army, was beheaded in Phrygia, a province of Asia Minor, in 304, for refusing to renounce his faith in Christ. At one time his fame eclipsed that of St. Martin at Rome. Many miracles occurred at his tomb; mementos, little phials made of earthenware, with the image of the saint between two kneeling camels and the inscription “the blessing of St. Mennas,” are found in almost all the museums in Europe. After the Eighth Century popular devotion to him declined.

Mary is the stairway to Heaven and the gate of Paradise.