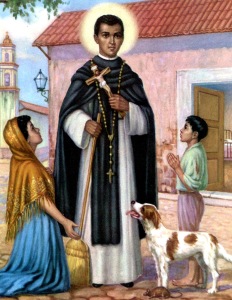 Born December 9, 1569, in Lima, Peru, he never had a chance. The illegitimate child of two races, Martin was deserted by his white father, Don Juan de Porres, and despised by his Negro mother, Anna. He had no childhood. It is a terrible thing not to be loved. It can produce the twisted, tormented, ruthless individual.

Martin became none of those things. Martin was loved. Somewhere in those early years of neglect, abuse, loneliness, and abject poverty, Martin found infinite Love. It was a little hard to grasp at first, and more than a little hard to believe. God loved him. God loved the despised, outcast child as much as He loved the governor or the archbishop.

God would never desert him as Don Juan had done, and Gods Mother was his Mother, loving him more tenderly than any other mother ever could.

Martin was apprenticed to a barber-surgeon and learned the art of shaving and hairdressing as well as the elementary knowledge of medicine that a barber was expected to possess in those days. He had an almost magical success in treating the sick, perhaps because of his intense love of Christ and His suffering children. It was this same zeal that gave him the strength to leave his shop when the day ended and to seek out the suffering people of the city. Lima was soon full of rumors about miraculous cures. There were long-standing headaches cured with a touch, fevers relieved in an instant, deep wounds that healed visibly while the patient watched.

In order that people might know that the miracles came from his Savior and not from himself, he desired to put on the anonymous robes of a religious. He became a tertiary, a servant of the Dominicans. His earthly father did not like it and felt that it was degrading. His heavenly Father, however, seemed to approve heartily, for He multiplied the miracles He performed through this layman in the black and white robes of the Dominican.

Martin eventually took solemn vows. His labors now increased unbelievably. Maintaining the infirmary and caring for the sick among the three hundred men in the novitiate, He continued to seek out the sick and the outcast. He brought sick slaves and Indians into the infirmary and made himself their slave while he treated them. Welcoming every mortification, he brought in patients suffering from loathsome diseases, placed them in his own bed, and washed and anointed their sores. When night came he extended his heroic charity to harsh asceticism, scourging himself until the blood flowed and then rubbing vinegar into the welts. Then he would retire to the chapel to pray for hours before the tabernacle.

Fabulous tales are told of Martin. He was mysteriously transported to distant places, answering prayers in India, China, or Africa. Often he seems to have been in more than one place at a time. Fellow religious came to take for granted the light that shone from him when he prayed, and were not surprised to find him floating in mid-air before the tabernacle. But Martin is not overshadowed by the long list of spectacular occurrences. His devotees seldom think of him as suspended in mid-air before a crucifix. They think of him as a smiling old man in a well-worn black and white habit, a rosary around his neck, a pair of shoes held together only by a miracle, and the most disreputable hat in all the world hanging to the back of his neck by a knotted string.

He commanded love, not awe. He commanded the love of the society that had cast him out. When he died on November 3, 1639, the hierarchy of Peru and Mexico served as his pallbearers, and great crowds gathered for his funeral, proclaiming him a saint, following the little mulatto brother who has been affectionately called the Pied Piper of Peru.”

(Adapted from Butler”s Lives of the Saints) “

Love Him totally who gave Himself totally for your love.