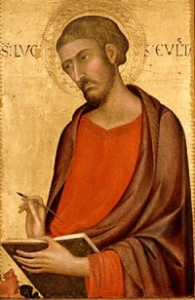 St. Luke, a native of Antioch, was converted by St. Paul, and accompanied him on many of his journeys. St. Luke is best known as the historian of the New Testament. He gathered information from the lips of the apostles and wrote, as he tells, all things in order. The Acts of the Apostles were written as a sequel to his Gospel. He died the death of a martyr, and was buried at Thebes in Boeotia. His relics were brought to Constantinople in 357.

A young village girl told me, When I am about to talk to anyone, I picture to myself Jesus Christ and how gracious and friendly he was to everyone.