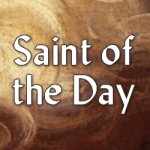 St. Nazarius was baptized by Pope Linus at Rome; in his turn he baptized the youthful Celsus. They were both beheaded at Milan about the year 368. Their bodies, buried in a garden outside the city, were found by St. Ambrose in 395. The body of St. Nazarius appeared as if it had just been beheaded. It was placed by St. Ambrose in the Basilica Romana. The body of the boy Celsus was found in another part of the garden, but was not removed. However, a basilica was later built in his honor.

Pope St. Victor, the thirteenth in order from St. Peter, is famous in the history of the Church of the first three centuries for his encyclicals addressed to all the churches, in which he appointed synods with a view to coming to an agreement concerning the date of the celebration of Easter. Even the bishops of the most remote dioceses of Asia Minor obeyed the Pope’s order and sent their votes to Rome, but as these were not in accordance with the Roman view, it very nearly caused a schism. He succeeded in settling the controversy about the date of Easter, and is said to have decided that in case of necessity Baptism might be given with natural water. He was the first ecclesiastical writer to write in Latin.

Pope Innocent I, Pope, Confessor (402 – 417), took a vigorous part in the defense of St. John Chrysostom; upheld the rights of the Holy See and wrote a letter on the liturgical questions which remain a notable document to this day.

Love Him totally who gave Himself totally for your love.