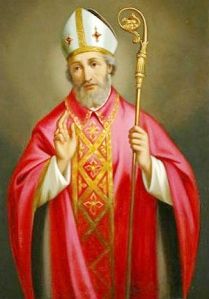 ANSELM was a native of Piedmont. When a boy of fifteen, being forbidden to enter religion, he for a while lost his fervor, left his home, and went to various schools in France. At length his vocation revived, and he became a monk at Bec in Normandy. The fame of his sanctity in this cloister led William Rufus, when dangerously ill, to take him for his confessor, and to name him to the vacant see of Canterbury. Now began the strife of Anselm’s life. With new health the king relapsed into his former sins, plundered the Church lands, scorned the archbishop’s rebukes, and forbade him to go to Rome for the pallium. Anselm went, and returned only to enter into a more bitter strife with William’s successor, Henry I. END_OF_DOCUMENT_TOKEN_TO_BE_REPLACED

Do now, what you will wish to have done when your moment comes to die.