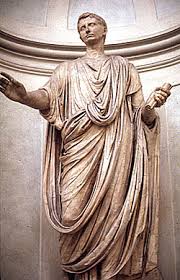 MARCUS AURELIUS had persecuted the Christians, but his son Commodus, who in 180 succeeded him, showed himself favorable to them out of regard to his Empress Marcia, who was an admirer of the Faith. During this calm the number of the faithful was exceedingly increased, and many persons of the first rank, among them Apollonius, a Roman senator, enlisted themselves under the banner of the cross. He was a person very well versed both in philosophy and the Holy Scripture. In the midst of the peace which the Church enjoyed, he was publicly accused of Christianity by one of his own slaves. The slave was immediately condemned to have his legs broken, and to be put to death, in consequence of an edict of Marcus Aurelius, who, without repealing the former laws against convicted Christians, ordered by it that their accusers should be put to death. The slave being executed, the same judge sent an order to St. Apollonius to renounce his religion as he valued his life and fortune. The Saint courageously rejected such ignominious terms of safety, wherefore Perennis referred him to the judgment of the Roman senate, to give an account of his faith to that body. Persisting in his refusal to comply with the condition, the Saint was condemned by a decree of the Senate, and beheaded about the year 186.

Refection.—It is the prerogative of the Christian religion to inspire men with such resolution, and form them to such heroism, that they rejoice to sacrifice their life to truth. This is not the bare force and exertion of nature, but the undoubted power of the Almighty, Whose strength is thus made perfect in weakness. Every Christian ought, by his manner, to bear witness to the sanctity of his faith. Such would be the force of universal good example, that no libertine or infidel could withstand it.

“Faith is to believe what you do not see; the reward of this faith is to see what you believe.”