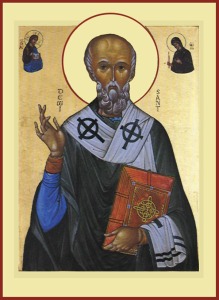 St. David , son of Sant, Prince of Cardigan and of Non, was born in that country in the fifth century, and from his earliest years gave himself wholly to the service of God. He began his religious life under St. Paulinus, a disciple of St. Germanus, Bishop of Auxerre, who had been sent to Britain by Pope St. Celestine to stop the ravages of the heresy of Pelagius, at that time abbot, as it is said, of Bangor. On the reappearance of that heresy, in the beginning of the sixth century, the bishops assembled at Brevi, and, unable to address the people that came to hear the word of truth, sent for St. David from his cell to preach to them.
END_OF_DOCUMENT_TOKEN_TO_BE_REPLACED 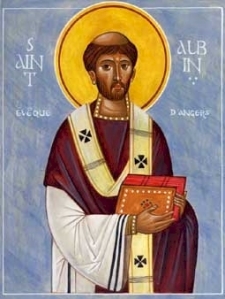 He was of an ancient and noble family in Brittany, and from his childhood was fervent in every exercise of piety. He ardently sighed after the happiness which a devout soul finds in being perfectly disengaged from all earthly things. Having embraced the monastic state at Cincillac, called afterwards Tintillant, a place somewhere near Angers, he shone a perfect model of virtue, especially of prayer, watching, universal mortification of the senses, and obedience, living as if in all things he had been without any will of his own, and his soul seemed so perfectly governed by the Spirit of Christ as to live only for him. At the age of thirty-five years, he was chosen abbot, in 504, and twenty-five years afterwards, bishop of Angers. END_OF_DOCUMENT_TOKEN_TO_BE_REPLACED

Do now, what you will wish to have done when your moment comes to die.